How to increase iron absorption?

Iron is a mineral necessary for the body to function properly. Therefore, it is very important to consume a sufficient amount of it in your daily diet.

Interestingly, the food you eat affects not only the amount of iron you consume, but also how well it is absorbed by the body. Once it's absorbed by your body, it's used as a component of hemoglobin, a protein found in red blood cells that helps transport oxygen around your body.

Iron is also a component of myoglobin, an oxygen-storage protein in muscles that uses this oxygen when you use them.

The following tips can help you maximize your dietary iron intake:

Eat chicken and fish, these are also good sources of heme iron.

Avoid coffee, tea, or milk before meals, avoiding these in meals that contain iron-rich foods. Instead, drink coffee or tea between meals.

Or you can choose Vitamin C 200mg With Iron 50mg 30 Tablets Controlled Release Caplet, it use a unique membrane-controlled release technology. They look like ordinary tablets on the surface,the dose is big for each tablet,but you can not feel any taste and pessimal stimulation after swallowed. Water get into the tablet core through the micropores in the film after being swallowed completely, and the active ingredients are dissolved and then released through the micropores at mean speed, it can be released continuously for 12 to 24 hours in your body, and it can be released uniformly in the stomach and intestines, which improves the absorption rate and avoids the irritation of the rapid release to the stomach. We can provide different specifications of packaging, such as Vitamin C 200mg With Iron 50mg 60 Tablets Timed-release Tablets, you can take 2 months if you take 1 tablet in a day, Vitamin C 200mg With Iron 50mg 90 Tablets Extended Release Caplet Support Oxygen-rich Blood, you should take 2 tablets by one time in a day if you are iron deficiency,as for 90 tablet per bottle, you can take them in 45 days to improve anemia, Vitamin C 200mg With Iron 50 mg 120 Tablets Sustained Release Caplet Easy On The Stomach And Less, which is the biggest bottle packing and suitable for a big family with many people. You may have heard that you can get iron from red meat, but there are many other foods that naturally contain iron.

In food,iron exists in two forms, heme and non-heme.

Heme iron is found in animal foods that contain hemoglobin, such as meat, fish, and poultry.

Heme iron is the best form of iron, with up to 40% of it being easily absorbed by your body.

Fish such as halibut, haddock, bass, salmon or tuna.Shellfish, such as clams, oysters and mussels. Offal meats like red meat and liver are especially good sources.

Non-heme iron comes primarily from plant sources and is found in grains, vegetables, and fortified foods.

This is the form added to iron-rich or fortified foods and many supplements.

Good sources of non-heme iron include fortified grains, rice, wheat and oats. Dark green leafy vegetables, such as spinach and kale. Dried fruits such as raisins and apricots. Legumes like lentils and soybeans.

Certain populations may be at risk of iron vitamins deficiency

Iron deficiency is the most common cause of anemia, affecting 1 billion people worldwide. People with iron deficiency may experience a variety of symptoms when doing simple tasks, including fatigue, dizziness, headache, sensitivity to cold, and shortness of breath. In addition, iron deficiency can lead to decreased concentration and decreased mental function. In fact, deficits in early childhood are associated with lower IQs. Children, adolescents, and women of childbearing age, especially during pregnancy, are most at risk of iron deficiency. This is because their intake does not meet the high demands of the body.

While not all dietary iron is equally absorbed, some foods can enhance the body's ability to absorb iron.

Vitamin C has been shown to enhance iron absorption. It captures non-heme iron and stores it in a form that is more easily absorbed by your body. Foods rich in vitamin C include citrus fruits, dark green leafy vegetables, bell peppers, melons and strawberries. In one study, taking Vitamin C 100 mg with meals increased iron absorption by 67%. Therefore, drinking citrus juice or eating other foods rich in vitamin C along with foods high in iron can increase the body's absorption. In vegetarian and vegan diets,iron absorption can be optimized by including vegetables containing vitamin C with meals.

Foods with Vitamin A and Beta-Carotene

Vitamin A plays a key role in maintaining healthy vision, bone growth, and the immune system.

Beta-carotene is an orange-red pigment found in plants and fruits. It can be converted into vitamin A in your body.

A cereal-based diet study in 100 people found that the presence of vitamin A increased iron absorption in rice by 200%, wheat by 80%,and corn by 140%. In the same study, dietary supplementation of beta-carotene increased absorption by more than 300% in rice and 180% in wheat and corn.

Not only do meat, fish and poultry provide well absorbed heme iron, they can also stimulate the absorption of non-heme forms. 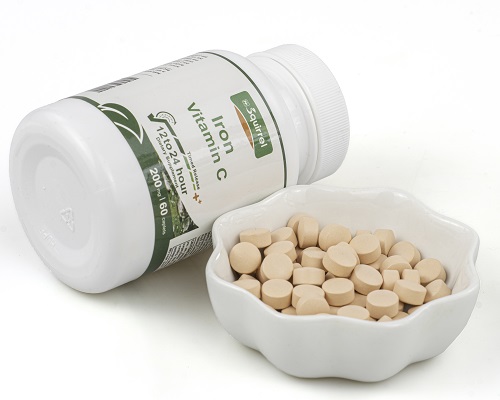 Foods that may hinder iron plus vitamin c absorption

Just as some foods can improve iron absorption, other foods can hinder it.

Phytates, or phytic acid, are found in foods such as whole grains, grains, soybeans,nuts, and legumes. Even small amounts of phytate can significantly reduce iron absorption.

Calcium is an essential mineral for bone health. However,some evidence suggests that it hinders iron absorption, whether the source is dairy or calcium supplements. Studies show that 165 mg of calcium in milk, cheese or supplements can reduce iron absorption by about 50-60%.

To maximize absorption, calcium-rich foods should not be eaten with meals that provide most of the dietary iron. In the case of supplements, calcium and iron supplements should be taken at different times of the day if possible.

Polyphenols are found in varying amounts in plant foods and beverages, including vegetables, fruits, some grains and legumes, tea, coffee and wine. Coffee and tea, both widely consumed with meals, are high in polyphenols and have been shown to inhibit the absorption of non-heme iron.

To counteract the negative effects of polyphenols, be sure to allow a few hours between iron-rich meals and afternoon tea or coffee.

Please contact with us if you need different packaging or customize your own label.