Home / News / How to use slow release iron with Vitamin C

How to use slow release iron with Vitamin C

Human life is inseparable from iron. Iron can produce heme which is helpful in preventing and treating iron deficiency anemia, which can promote the metabolism of vitamin B family.The human body must supplement enough iron every day. Iron is good for human development and can enhance the body’s resistance to the body. Iron can improve the body's fatigue and has the benefit of regulating tissue breathing. Iron can improve a person's complexion and make the complexion ruddy. They need to take adequate iron supplements if people are iron deficient.

What’s the relationship between iron and vitamin c tablets?

As one of dietary supplement, which is an iron supplement used to treat or prevent low blood levels of iron, such as those caused by pregnancy or anemia. Iron is an important mineral that the body needs to produce red blood cells and keep you in good health. Iron of slow release tabletcome from Ferrous Sulfate.

Iron is a mineral that your body needs to produce red blood cells. It cannot produce enough red blood cells to keep itself healthy when the body does not get enough iron. This is called iron-deficiency anemia.Lack of iron in the body can cause tiredness, shortness of breath, and decreased physical performance. It also can increase the chance of a liver transplant patient getting infections.

People take iron supplements when their bodies do not have enough iron.Your body uses iron to make hemoglobin.

Hemoglobin is part of red blood cells. It carries oxygen through the body. Without enough oxygen, you may feel weak, dizzy, and short of breath. You may tire easily. You also may feel grumpy, have headaches, and have trouble concentrating. 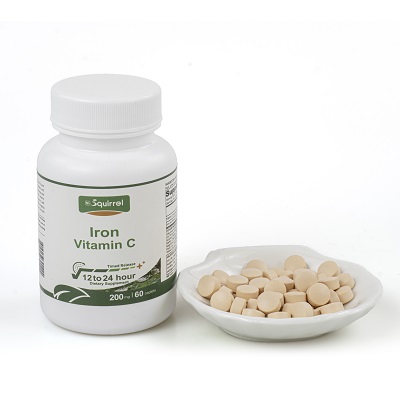 How to use iron tablets with vit c?

Slow release is also referred to as sustained release,extended release, or controlled release. we think.

Iron 50 mg with Vitamin C 200 mg slow release tablet is produced based on a special technique that releases the medicinal ingredients and nutrients in vivo according to a predictable,therapeutically rational programmed rate to achieve the optimal levels into the body in 12-24 hours. It releases at a constant rate, which is controlled by the numerous microspores on the outer layer coating film. It is decsription about our controlled release technology. In fact, we can’t see so numerous microspores on the outer layer coating film at all. It can release slowly through the numerous microspores according to the delay of time, it will finished release during 12 to 24 hour, so you take 1 tablet only in every day.

There are many iron supplements in the market, such as oral solution for iron supplementation, regular iron tablet, most people can’t accept the rust smell from them.the experience is too poor. Maybe it is the biggest disadvantage as general iron supplementation. Our Vitamin C 200mg with iron 50mg controlled release tablets choose a unique membrane-controlled release technology. It looks like regular tablets from its appearance, and you will not feel any smell and taste when swallowed. Water enters the tablet core through the micropores in the film after being swallowed completely, and the active ingredients are dissolved and then released through the micropores at a uniform rate, it can be released continuously for 12 to 24 hours according to needs, and it can be released uniformly in the stomach and intestines, which improves the absorption rate and avoids the irritation of the rapid release to the stomach.

1.Iron is best absorbed on an empty stomach, so you can usually if taken 1 hour before or 2 hours after meals).you may also take it food. Your stomach can’t upset occurs at all.

2.Take tablets with a full glass of water follow its direction on the product package.Do not take more than the recommended dosage.

3.Swallow slow release tablet whole. Do not crush or chew extended-release capsules or tablets. Because it is controlled release tablets.Take it regularly in order to get the most benefit from it. To help you remember, take it at the same time each day.

Anyone can develop iron-deficiency anemia,although the following groups have a higher risk:

1.Women blood loss during monthly periods and childbirth can lead to anemia.

2.People over 65 who are more likely to have iron-poor diets.

3.People who are on blood thinners such as aspirin, Coumadin, Plavix or heparin.

4.People who have kidney failure, especially if they are on dialysis,because they have trouble making red blood cells.

5.People who have trouble absorbing iron.