What is cfu probiotic?

Probiotics are a class of active microorganisms that work by improving the balance of the host's intestinal microflora, and can produce definite health effects to improve the host's microecological balance and play a beneficial role. In 2001, the World Food and Agriculture Organization (FAO) and the World Health Organization (WHO) also defined probiotics as follows: live bacteria that can exert an effective effect on the health of the consumer by ingesting an appropriate amount. Bacteria or fungi in humans and animals mainly include: Clostridium butyricum, Lactobacillus, Bifidobacterium, Lactobacillus acidophilus, Actinomyces, yeast, etc.

What is the gut microbiota?

The human body provides living space and nutrition for symbiotic bacteria, and these bacteria, such as Bifidobacterium, Lactobacillus, Bacteroides, etc., are the human body: 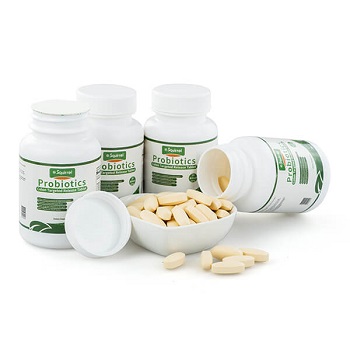 Produce beneficial substances, such as bifidobacteria, lactobacilli, etc., which can synthesize a variety of vitamins necessary for human growth and development, such as B vitamins (vitamins B1, B2, B6, B12), vitamin K, niacin, pantothenic acid, etc.;

It can also use protein residues to synthesize essential amino acids, such as aspartic acid, phenylalanine, valine and threonine;

Participate in the metabolism of carbohydrates and proteins, and also promote the absorption of mineral elements such as iron, magnesium, and zinc.

These nutrients play an important role in human health, and if they are lacking, they will cause a variety of diseases.

"Healthy intestines and longevity" was proposed by Dr. Daida of Kyoto University more than 70 years ago. He believes that one of the reasons for human aging is directly related to the aging of the intestines. The increase of harmful bacteria will cause the imbalance of the flora. The harmful bacteria will decompose and metabolize food residues and harmful toxins, which will poison the body and cause the intestines to age. "Gut age" is much greater than chronological age. It is exactly the same as the gene map of Chinese people's 0-100-year-old intestinal flora released by our research. To this end, human health and longevity should prevent aging in the gut, and probiotics play a key role in the balance of human gut flora.

How to properly supplement digestive probiotics?

How much probiotics the human body needs has been the focus of research and debate among scientists. However, most of them agree that the daily intake of probiotics depends on the purpose of supplementing probiotics. At present, more and more probiotics researchers or institutions will conduct animal and clinical experiments and clinical trials on the effective dose of probiotics. Repeated verification. We can usually consume probiotics by properly choosing some foods that contain a variety of probiotics.

According to experts, in order to promote health through probiotic supplementation, it must be "specific bacteria", "maintain active", "have a sufficient number of bacteria" and "take it continuously." In addition, the different varieties of probiotics, the number of viable bacteria, dosage forms, storage methods, and taking methods will also affect their effects.

After inquiry, the original data of the clinical research of Professor Reid, chairman of WHO probiotics, shows that the pH value of gastric juice is generally between 0.9-1.8. Such acidity is difficult for probiotics to survive, and the best is about 1% after 3 hours. (The experimental design is 0 hours, 0.5 hours, 1 hour, 2 hours, 3 hours and 4 hours of observations, only the results of 3 hours are extracted here. Because of the mixed diet of people, it is emptied after 3 hours, which is 3 hours After 3 hours of digestion in pH 1 gastric juice, the number of viable bacteria (log10 cfu/ml) decreased from 7.0 to <3.0, and for L. acidophilus N2, the number of viable bacteria decreased from 6.2 decreased to <2.0, Lactobacillus bulgaricus, the viable count decreased from 9.3 to <1.0, and Streptococcus thermophilus, the viable count decreased from 5.0 to <1.0.

Common probiotics such as bifidobacteria, lactobacilli and streptococcus, etc., they are closely combined with the intestinal mucosa, forming a barrier to the intestinal tract, inhibiting the overgrowth of opportunistic pathogens, and blocking the invasion of foreign pathogens; at the same time Probiotics stimulate the intestinal mucosa to secrete mucus and cytokines, which can resist the invasion of pathogenic bacteria; probiotics can also promote the secretion of immunoglobulins and play an immunomodulatory role.