Slow release iron supplement- what are the effects of it

We can manufacture iron with vitamin C controlled release tablet, each tablet contains 50 mg iron and 200 mg vitamin C, and 50 mg iron come from 140mg Ferrous Sulfate, 60 tablet for each bottle, Tablets for a 60-day supply.

Iron 50 mg plus vitmain C 200 mg time-release tablets use a special outer coating release technology to release small amounts of the active ingredientsin to a person's system over a long period of time. Our release time is designed as 12 to 24 in the body after swallowed.

Controlled release tablets,on the other hand, dissolve in the digestive system over a period of time, so the full dose is not released into the bloodstream right away. Instead, the dose is slowly released from the caplets over time so the medicine’s concentration level can stay constant in the body until the next dose is consumed.

This adult iron supplement 50 mg provides a dietary supplement for those who are Iron deficient, including women in their reproductive years.

Adults take one iron with vitamin C controlled release tablet for Iron deficiency daily with water and a meal. 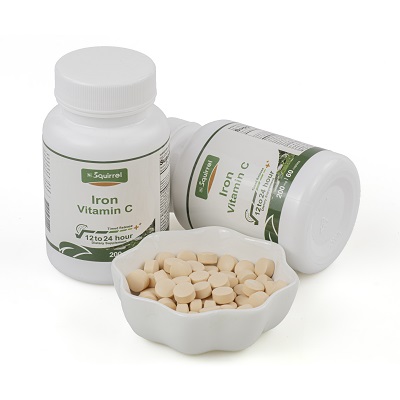 We can introduce some effects of iron 50 mg with vitamin C 200 mg controlled release tablet as following:

3. May help with unusual tiredness

4. Delivers 50mg of iron per tablet

5. Small tablets are easy to swallow.

Vitamin C helps release a higher percentage of iron from non-heme sources, thereby increasing your body's ability to absorb more iron from these foods. Vitamin C also helps to overcome the adverse effects of phytonutrients that inhibit the absorption of non-heme iron, including oxalic acid, phytic acid, tannins and polyphenols.

Try to combine the mineral iron with Vitamin C to maximize the absorption of non-heme (plant) sources. Breakfast is a good time to enjoy the energetic duo!Taking 1 or 2 tabets of iron 50mg with Vitamin C 200mg controlled release tablets with water or meal, Vitamin C can boost iron absorption. This combination can meet the body's iron needs, especially for women who have a big needs for iron. Their body will lose much iron during the monthly menstrual period, and it is necessary to supplement iron every day. We suggest women should take Vitamin C 200mg with iron 50mg timed release tablets every day. Checking the nutrition label of it to make sure it contains enough iron. 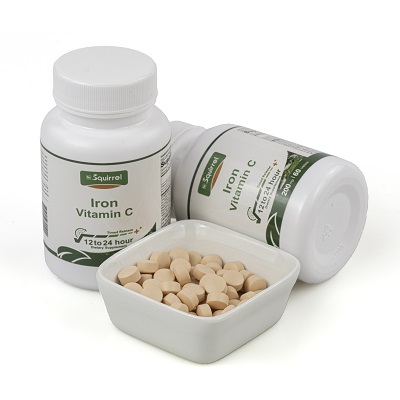 The source of vitamin C does not affect iron absorption although it is always preferable to obtain nutrients from real food. Taking iron 50mg plus Vitamin C 200mg sustained release tablets, the formula designed as controlled release tablets, it means the releasing time is 12 to 24 hour in the body,that is to say, it can contibue to Provide nutrition within 12 to 24 hour.

We know some medcine often be made timed release drugs, these drugs may be prescribed with instant-release pills, which are designed to release all their medication as quickly as possible. Time-release drugs use a special technology to release small amounts of the medication into a person's system over a long period of time.This is also referred to as sustained release, extended release, or controlled release. These tend to come in pill form and are simply made to be more potent but dissolve slowly.

This drugs are mostly done for chronic pain patients who experience breakthrough pain, which is so intense that it breaks through the time-release medication already in the system.

Timed-release is also referred to as extended release, sustained release, slow release, or controlled release. These tend to come in tablet form and are simply made to be more potent but dissolve slowly. Our controlled release dietary supplements use a special technique that releases the medicinal ingredients and nutrients in vivo according to a predictable, therapeutically rational programmed rate to achieve the optimal levels into the body in 12-24 hours. It releases at a constant rate,which is controlled by the numerous microspores on the outer layer coating film.

Each tablet is designed with a special coating that releases nothing until it reaches the stomach. This dosage form offers significant benefits as to avoid taking multiple doses and reducing the pill burden, it allows people to take only 1 caplet a day. With the gradual, steady release of nutrients from controlled release caplets, the body can absorb and use more of the nutrients consumed. Controlled release tends to come in pill form and is simply made to be more potent but to dissolve slowly. This made people experience fewer GI side effects.

Vitamin C and iron as two kinds of main dietary supplements, both have various benefits for the body.studies show taking Vitamin C and iron together may be better than taking alone,and can increase the absorption of iron from non-heme (plant) sources.and iron is essential for hemoglobin formation, it can help improve energy and strength gentle to your system,and reduce the side effects associated with immediate-release iron.