Home / News / Common sense about melatonin you need to know

Common sense about melatonin you need to know

What is delayed release melatonin?

Melatonin is a hormone that tells the body it's time to sleep. In people without sleep problems, the body follows a roughly 24-hour biological clock called the circadian rhythm.

Changes in light and temperature help tell the body when to feel tired. The brain releases melatonin when it's dark, suggesting that melatonin helps regulate drowsiness in this situation. And exposure to light may hinder melatonin production, which is why it's important to sleep in a dark room.

A 2015 study examined a rare mutation in zebrafish that prevents them from producing melatonin. The fish slept very little, even though the researchers ensured they were fully exposed to darkness. These findings suggest that the body relies on melatonin, not just light changes, to help you fall asleep.

How does dissolvable melatonin work?

First, melatonin changes the body's response to darkness, helping the body get into the rhythm of nighttime sleepiness.

Second, exposure to light at night—including from computer and TV screens—may suppress the body’s natural melatonin production, disrupting sleep; similarly, those who sleep during the day because of work at night may not produces melatonin. Supplementation with melatonin can help counteract this effect.

Additionally, studies show that melatonin can help people sleep faster and longer. A 2013 meta-analysis of 1,683 study participants found that melatonin reduced the time it took participants to fall asleep and also increased their sleep time compared to a placebo.

Other research suggests that melatonin can improve sleep in people who:

● Sleep disturbance due to shift work 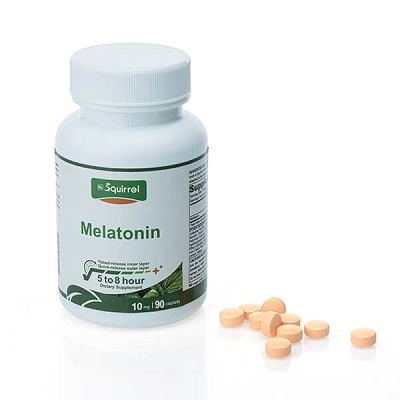 The ideal dose of melatonin varies from person to person. Various factors, such as weight, metabolism, and overall health, may also affect how the body responds to melatonin.

Typical doses of melatonin are between 1 mg and 5 mg, with better results when taken an hour before bedtime.

People can try starting with a lower dose to see if there are any side effects. If necessary, the dose can be increased gradually until sleep improves. It is important not to take more than 5 mg unless your doctor recommends a higher dose.

One of the common side effects of melatonin is drowsiness. Some people may notice that they feel sleepy or groggy in the morning after taking melatonin. Taking melatonin earlier in the night or reducing the dose can help people wake up feeling refreshed.

Other possible side effects include:

In some people with dementia, melatonin may trigger bad moods.

Although melatonin is a natural chemical, it is important to treat it like any other drug. Melatonin has the potential to interact adversely with other drugs, reducing their effectiveness, triggering negative side effects, or changing the way the body metabolizes the drug. People taking other medicines should talk to their doctor before using melatonin.

As with any medication, allergic reactions are possible. People with a history of allergies to supplements should avoid melatonin. Anyone who notices signs of an allergic reaction, such as itching or hives, should contact a doctor. If patients have trouble breathing or feel choking, they should go to the emergency room or call 911.

Very limited data suggest that melatonin may increase the risk of seizures, but other studies have found that it may reduce this risk. Regardless, people with epilepsy or a family history of epilepsy should try to consult their doctor before using melatonin.

Several studies involving children also suggest that melatonin may alter the function of the hypothalamic-pituitary-gonadal axis. This, in turn, could change the way the body produces or metabolizes hormones, potentially affecting a child's growth. It should be noted that the results of this study are not yet conclusive.

Difficulty sleeping is common. Some people have only occasional insomnia, while others have chronic sleep problems. Melatonin provides a natural solution that mimics hormones already produced by the brain.

For many people, melatonin is an effective sleep medication alternative. However, people should treat melatonin like any other drug and watch for side effects carefully.