Home / News / What is Vitamin C good for

What is Vitamin C good for

Vitamin C is one of the most talked about vitamins. This nutrient has received special attention for its immune-boosting potential. This antioxidant isn't naturally produced by the body, so it's important to get it from foods rich in vitamin C. Vitamin C is found in a variety of foods, including red and green peppers, citrus fruits, kiwi, broccoli, tomatoes and Brussels sprouts.

According to the National Institutes of Health (NIH), adult women need 75 milligrams (mg) of vitamin C per day and adult men 90 mg. Most Americans get enough nutrition through diet alone. If your health care practitioner has diagnosed you with low immunity and prone to illness, we recommend that you take some vitamin c controlled release caplet. 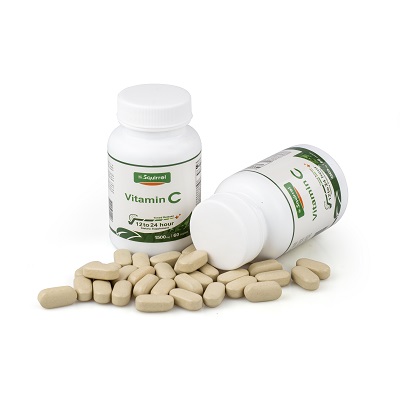 What is controlled-release on dietary supplements?

Controlled-release dietary supplements use a special technology to release small amounts of the Vitamin C into a person's system over a long period of time. This is also referred to as sustained release,extended release or timed release.These tend to come in tablet form and are simply made to be more potent but dissolve slowly.

Maybe you know vitamin c 500 mg time release caplet and vitamin c time release 1000mg tablets on Amazon, yes, it is timed release Vitamin C which release need 2 stages, 6 hour for one stage,and 6 hour for another stage, the releasing route looks like a parabola with 2 openings down.

Ours releasing time is continuous and keep 12 to 24 hour releasing in the body, so you take 1 caplet daily only with a meal or glass of water. Don’t need take 2 or 3 times at all.

We can make one testing with cheap vitamin c 1000 mg controlled release tablet at home.

Fill water into the glass cup, and put 1 vitamin c tablets 1000mg into water, You can stir with a spoon every half hour, time is passed by an hour, 2 hour, 3 hour, 4 hour, you will find a empty shell floating one the top of water after 24 hour, that is to say, vitamin c time release 1000mg tablet is released fully into the water. 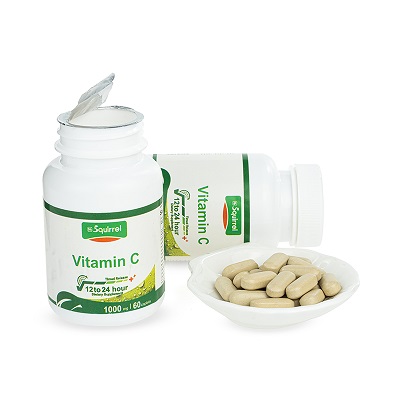 Read on to learn about what is Vitamin C good for?

According to the National Institutes of Health, the body relies on vitamin C to synthesize collagen, which is found in the connective tissue that surrounds the body. Adequate vitamin C levels are essential for the production of collagen, the most abundant protein in the body and plays a vital role in connective tissues, such as those found in our organs and of course our Hair, skin and nails.

As some health and beauty experts describe it,  you probably know that collagen is your skin's anti-aging savior.  A September 2015 study published in Clinical, Cosmetic, and Investigational Dermatology found that topical application of vitamin C to the skin increased collagen production and made skin look younger.

Another benefit of vitamin C is how it interacts with other vitamins and minerals in the body, such as iron. iron supports proper growth and development, helps the body's ability to deliver oxygen throughout the body, and helps make certain hormones. Non-heme iron, a type of iron found in plants, is difficult for the body to absorb, but consuming vitamin C (preferably heme iron, which is commonly found in meat and seafood) along with it will result in better absorption.

3. It plays a role in enhancing brain function

Vitamin C also plays a role in neurotransmitter synthesis and cognitive function. Neurotransmitters are important for sending information from the brain to the rest of the body, according to the University of Queensland in Australia. More vitamin C may be associated with increased brain function.

Many of the benefits of vitamin C can be traced back to its antioxidant properties. Antioxidants work to neutralize free radicals, volatile and harmful substances produced in the body that can cause damage to cells and tissues. Antioxidants can prevent the development of serious health conditions such as cancer or heart disease.

Perhaps the most famous benefit of vitamin C is its positive effect on the immune system. vitamin C was found to support the immune system by preventing oxidative stress, helping kill microorganisms and reducing the potential for tissue damage. Deficiency of this vitamin has been shown to increase infection rates. Once you start sniffling, vitamin C supplementation is unlikely to keep you from catching a cold, but it may help you recover faster.

Eating a diet rich in vitamin C fruits and vegetables appears to reduce the risk of some types of cancer.

A study published in Cancer Research in February 2019 found that high doses of vitamin C in combination with cancer drugs help fight breast cancer cells. An important caveat: Study participants were receiving extremely high doses of vitamin C, which one should not expect to get at home through diet and supplements.

The American Optometric Association states that vitamin C can reduce the risk of cataracts and can also help slow the progression of age-related macular degeneration (AMD). However, it is best to discuss this with your ophthalmologist or attending physician before taking any supplement long-term.